Influence Of Art In Advertising

Have you ever noticed how some advertisements resemble famous art paintings and sculptures? Advertisements are heavily influenced by visual art. While the intent of advertisements is to sell a product or service and art portrays emotions, there is still an interplay between the two. Advertising has greatly shifted from selling hope to involving a sentimental value.

Much to our surprise, back in the day, people used the work of the artists for their advertising interest. So, this interplay isn’t a modern age thing, art has had a long relationship with advertisements. However, several decades would have to pass for the advertisement to be introduced into art as an essential part. It would not be until the birth of Pop Art that the ads became a reoccurring source of themes for art.

Different Arts & Its History In Advertising

There are several styles of art such as the renaissance, art expressionism, impressionist, Art Noveau, and Art Deco that have made their way into print advertisements.

1- The Great Wave In Pop Culture

The Great Wave of Kanagawa by Katsushika Hokusai surpassed the mere “artwork”. Levis Live campaign created a three-dimensional sculpture of the pre-modern artwork out of denim. Even though the jeans that represent water isn’t entirely visible, it is a great example of mix-media. It is a classic example of contemporary art reflecting pre-modern art. Although the art is interpreted as a version of a tsunami, the advert is shown in a positive context.

Turns out Salvador Dalí’s most iconic painting that portrayed a surrealistic scene unknowingly created an ad himself! The painting populated with melting pocket watches strewn across dead trees and a desert landscape makes it a perfect tool for selling tea. The ad simply switched the melting clocks with melted Lipton tea bags. Even though some may claim that there is a tweak in the advertisement, the message intended is quite clear.

Commercial illustrators carved a different path during the Abstract Expressionism of the era. Norman Rockwell the painter of the iconic painting ‘The Four Freedoms’ that portrayed war bonds during World War II created adverts for Jell-O and Orange Crush.

Pear soap advert was influenced by the most iconic painting bubbles, originally titled “A Child’s World”. What’s interesting is that the painting was sold to the pear soap company where they used this famous painting from the victorian era as their advertisement. ‘’The bubble” has a significant history of being used in paintings known as “memento mori”. The illustrated works portray how human life was a brief interval, followed by death.

Only if Van Gogh knew that his famous art was going to be used in advertisements by various brands. His paintings are often used in advertising, easily recognizable with their unique style.

Lexus landed with Van Goghs along with Vermeer’s ‘Girl with a Pearl Earring’ artwork with the commercial ‘The Art of Standing Out’ that brought both modern and classic works in juxtaposition. Van Goghs famous sunflowers were replaced in this Lexus ad.

A french eyewear company used Van Gogh’s self-portrait as an element to advertising their brand.The revolutionary impressionist art was known for its brush strokes and emphasis on light making them look hazy. KelOptic an eye company tactfully came up with a print ad where they took up a classic painting and showed their product as a means for clearing blurry vision. 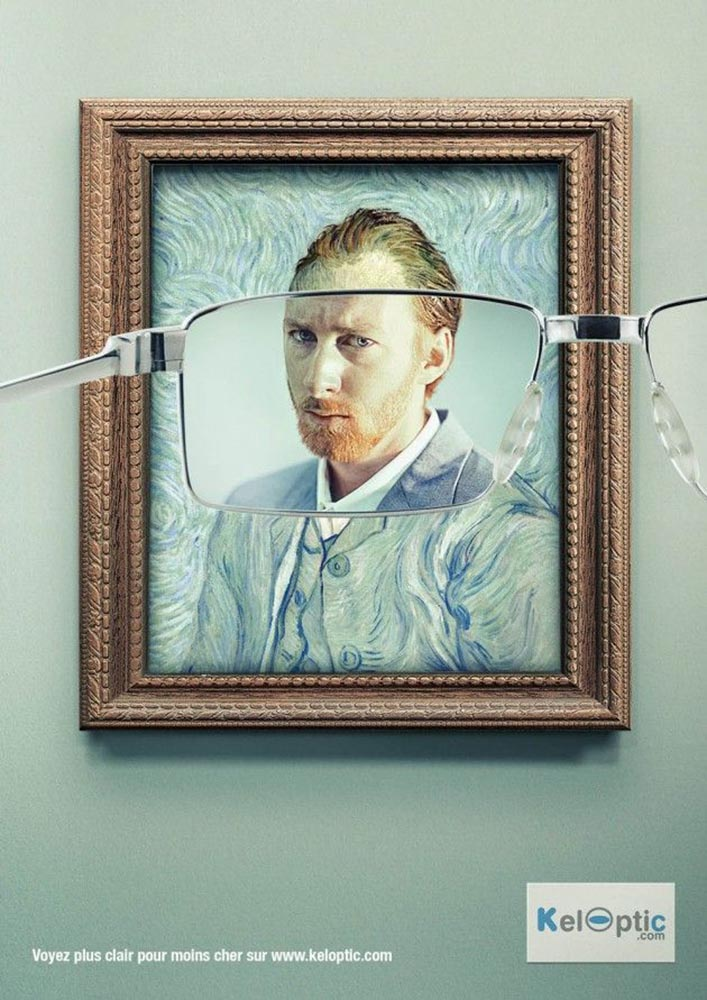 Nestle’s packaging has been greatly inspired by Vermeer’s masterpiece. Infact their famous yogurt brand is based on the same name as the painting. Since the painting gives the image of homemade yogurt, Nestle took this work of art that is simple yet brings relevance to their brand.

Although there are quite a lot of ads that have their own appeal, it is the old classical art that still holds its relevance in the era of modern art.

The evolution of art in advertising is quite fascinating. The visually appealing arts catches the eye of people in no time. Incorporating art in advertising has effectively convinced and drawn the audience over generations. Well, that’s the power of art! If you are keen on learning more about how art functions in advertisements, check out this course now.